About Rock History – The Musician’s Perspective 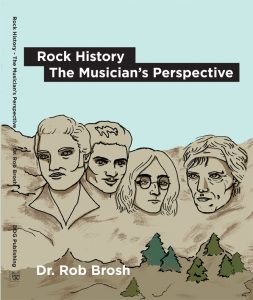 Rock History-The Musician’s Perspective is a comprehensive three-part rock music history textbook designed for college (and related) level music courses. This eighteen chapter work begins with a look at the early roots of rock music. It then progresses through the genre of rockabilly to the rise of Elvis Presley, to the evolution of the blues and its impact on early rock ‘n’ roll. Next, early rock icons such as Little Richard and Chuck Berry are profiled. The evolution of the blues in rock progresses to the British supergroups such as The Rolling Stones, Cream, and Led Zeppelin. The Beatles and the Solo Beatles highlight a chapter and a chapter on the American answer to the British Invasion investigates many iconic bands and artists such as The Grateful Dead and Jimi Hendrix. Part two is divided into seven chapters that explore the genres of folk-rock, art rock, country and southern rock. Then, heavy metal and hard rock are explored followed by classic rock bands and singer-led classic rock artists. This section ends with a chapter on progressive rock. Part three begins with punk rock and new wave followed by the pop-rock genre. A chapter follows on rock in the “big” 1980’s, the grudge movement of the 90’s, and alternative rock. A chapter on important styles that mixed with rock (such as rap-rock)continue and the book concludes with a special chapter on visionary artists and bands that have pointed to the future of rock music. What makes Rock History-The Musician’s Perspective unique is; the dozens of groundbreaking albums profiled, hundreds of important rock songs explored, and hundreds of quotes from the artists themselves. This comprehensive book documents what made rock music the most exciting and ever-evolving combination of subgenres in music history. Rock History-The Musician’s Perspective will provide you with the complete history of rock music.

What does Rock History-The Musician’s Perspective offer that the other rock history textbooks don’t have?

✯ The principal author of this book, Dr. Rob Brosh, has taught rock history at The University of the Arts for the past twelve years.   He, along with contributing writer, Mark Griffith, are successful musicians, educators, and writers that have brought the musician’s perspective to the study of the history of rock music.

✯ This book features the original concept of parallel streams study. This means that the examination of rock music is not impeded by keeping it perfectly chronological.  Many rock music subgenres are revealed that developed simultaneously in a “parallel streams” evolution.

✯ What is the musician’s perspective?  Rock music history is often presented with an over emphasis on chart success.  While that is a good starting and reference point, it doesn’t reveal the entire history of rock music, since so much of this influential music never found overwhelming chart success.

✯ Rock History-The Musician’s Perspective not only examines important rock artists and bands, but it also examines 272 key songs throughout the history of rock ‘n’ roll and 71 of the legendary groundbreaking albums in rock history.

✯ This textbook doesn’t get weighted down in the “sex drugs and rock ‘n’ roll” stories of rock history.  Nor does it get overly technical or theoretical making it only relatable to musicians.  This book strikes a balance that provides informed reading for the college music student and the everyday fan of rock music.

✯ This book examines the real roots of rock ‘n’ roll and how it has evolved up until today.   Rock History-The Musician’s Perspective traces the real beginning of rock music.  It progresses through every subgenre and every new style of rock that has evolved.

✯ This book not only focuses on high profile rock stars, but also on the smaller names that played on and produced many rock albums.

✯ Rock History-The Musician’s Perspective clarifies the study of rock music by largely removing the evolution (not the influence) of rhythm and blues, and clearly defining the differences between the two musical styles.

Contains These Unique Features that Link the Reader Directly to the Music: 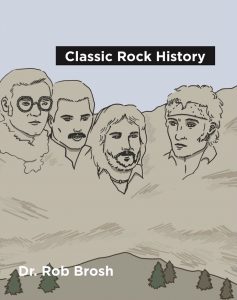 Classic Rock History – from The Beatles to Nirvana and more.

Classic Rock History is a new and exciting book for rock music enthusiasts of  all ages that enjoy the many rock sub genres that developed over the past 75  years.

Dr. Rob Brosh takes you inside the music of the legendary classic rock artists   and bands that changed the course of rock history.  From the British Invasion bands to the American Answer, all of rock’s subgenres are represented  including; heavy metal and hard rock, punk-rock, grunge, alternative rock,  country-rock, progressive rock and more.  The most influential rock legends, such as Keith Richards and Bruce Springsteen, are profiled as well as various topics and issues connected to rock music.  The many colorful illustrations capture the spirt of each rock music style and genre.  Have you have ever wondered why Led Zeppelin’s Jimmy Page used a violin bow on his guitar or why heavy metal became the most popular rock subgenre internationally? Classic Rock History is a must have to expand your rock music knowledge

Classic Rock History connects you to dozens of rock’s groundbreaking albums, hundreds of rock’s greatest songs, and gives you an in-depth look at what made rock music the most exciting and evolving combination

Classic Rock History connects you to dozens of rock’s groundbreaking albums, hundreds of rock’s greatest songs, and gives you an in-depth look at what made rock music the most exciting and evolving combination